On June 29th, the Board of Overseers of the ESSEC Group renewed its confidence in Vincenzo Vinzi, whose role as Dean & President of ESSEC Business School has been extended until 2027.

"I am thrilled to continue my mission as Dean & President of this great business school, and I thank all ESSEC's stakeholders for renewing their confidence in me. In this period of crisis and upheaval that our economies, societies and world are going through, I am delighted to be able to continue to take concrete action to make ESSEC the reference business school for the training of responsible, inclusive and influential leaders who will be the actors of positive change that combine value creation and the common good", says Vincenzo Vinzi.

The School also announces today the appointment of Aarti Ramaswami as Executive Vice-President & Dean of Pre-Experience Programs and member of the Executive Committee as of September 1, 2022. Emmanuelle Le Nagard, who will report to her, will take up the position of Academic Director of the Master in Management (Grande Ecole).

Originally from the island of Capri in Italy, Vincenzo holds a Master's in Business economics and a Doctorate in Computational Statistics from the University Frederico II of Naples. He taught at the same institution until 2007. He has been a visiting professor and lecturer at numerous universities and research centers throughout Europe, the United States and Asia.

Professor Vinzi joined ESSEC in 2007 as a professor of statistics and became Dean of Faculty in 2011. Between 2012 and 2015, Vincenzo Esposito Vinzi served as President of the International Society of Business and Industrial Statistics (ISBIS).

After serving a 6-month interim period, he was officially appointed Dean & President on December 20th 2017, becoming ESSEC's first international Dean, and the only one who was a former member of its faculty.

Internationally recognized for his expertise, Vincenzo Vinzi is the author of about 80 scientific papers and more than 7,000 citations published in international journals on topics ranging from Big Data to Business Analytics.

Professor Vinzi currently sits on several boards: the Conference of Directors of French Management Schools (CDEFM), the CentraleSupélec engineering school, the Alliance Française de Paris (AFPIF), AmCham and the Conférence des Grandes Ecoles (CGE). He is a member of the International Advisory Board of Solvay Business School and the International Advisory Board of Universitat Pompeu Fabra - Barcelona School of Management.

Finally, he is President of the Diversity Commission of the CGE (Conférence des Grandes Ecoles) and of Concours Sésame, a competitive entrance exam for French business school undergraduate programs. 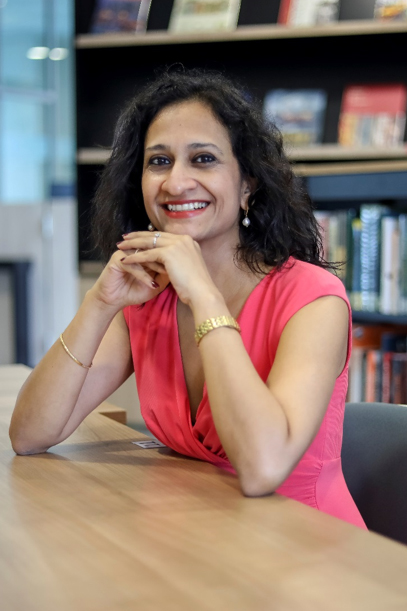 Aarti Ramaswami is a Professor of Management, and the Deputy Dean of ESSEC Asia-Pacific. She joined ESSEC France in 2009 and has been based at the Singapore campus since 2016. Prior to taking on the Deputy Dean role in 2018, Aarti was also Academic Director of the Global MBA Mentoring Program (2011-2013), and Academic Director of the Global MBA France-Singapore (2017-2020).

Prof. Ramaswami holds a PhD in Organizational Behaviour and Human Resource Management from the Kelley School of Business, Indiana University Bloomington, USA. She is also a certified Executive Coach trained in Ontological Coaching.

Her research on career success and systems used to identify, select, and develop managerial and executive talent has appeared in several top international peer-reviewed journals as well as in the popular press.

She has taught in the Grande Ecole, Specialized Masters, Global MBA, Executive MBA, Executive Education, and Doctoral programs at ESSEC and is also a certified Executive Coach. Aarti has an international profile, having lived and worked in India, the United States, France, the United Arab Emirates, and Singapore.

Professor Ramaswami succeeds Felix Papier whose mandate ends and will be moving back to France to take on her new role as Executive Vice President and Dean of Pre-Experience Programs from September 2022. She will be a member of the Executive Committee.

Emmanuelle Le Nagard is Professor of Marketing, and Associate Dean of Education since 2014. She holds a degree from ESCP, a DEA from Sciences Po and a PhD from HEC.

She joined ESSEC in 1997 and teaches in the Grande Ecole, Specialized Masters and Executive Education programs. She also holds a Habilitation to Supervise Research (HDR) and publishes in the field of Innovation Marketing. She was President of the French Marketing Association from 2012 to 2014 and Editor-in-Chief of the magazine Décisions Marketing from 2015 to 2019.

Professor Le Nagard has held the positions of Department Head and Chairholder. She was at the origin of the creation of the Innovative Product Conception Program dedicated to innovation, in partnership with Strate Design, Centrale Supélec and Schoolab.

She will take up her new position as Academic Director of the Master in Management (Grande Ecole) from September 2022.

The future of green jobs

What does the future hold for green jobs?

After two years of remote work, here's how ...

How being proactive can help you find ...